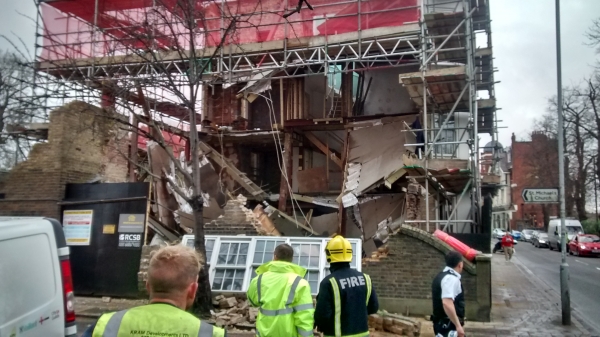 A Grade II listed Georgian House on Barnes Terrace has collapsed whilst building work was being carried out. Developer were enlarging the basement of the house to include a media room and wine store, as well as carrying out work to the upper stories.

The house valued at £3.8 million by Zoopla is owned by a former Phones4U chief executive David Kassler. It was previously owned by pop star Duffy, and in its further past was the home of Ebenezer Cobb Morley the inventor of the rules of Association Football.

No one was injured in the collapse but there are fears for the structural integrity of the neighbouring house (a historically important listed house which itself had only recently been renovated in a major development).

The closure of the Terrace has caused major traffic congestion. It is not known how long the road will be closed but until fears of the collapse of the neighbouring house are abated the road is likely to remain shut.

The Barnes based Safer Basements Campaign has urged Richmond Council to issue a moratorium on all further basement digs until the cause of the collapse of the house has been established.