The first Hammermith bridge was built in 1825. It was the Thames' first suspension bridge and was designed by William Tierney Clark. Construction of the bridge cost some £80,000 and it was operated as a toll bridge.

By the 1870s Hammersmith Bridge was not strong enough to support the weight of heavy traffic and the owners were alarmed in 1870 when 11,000–12,000 people crowded onto the bridge to watch the University Boat Race. In 1884 a temporary bridge was put up to allow a more limited cross-river traffic while a replacement was constructed.

The current suspension bridge was designed by noted civil engineer Sir Joseph Bazalgette and rests on the same pier foundations constructed for Tierney Clark's structure . It was opened by the Prince of Wales on 11 June 1887 and it cost £82,117 to build. 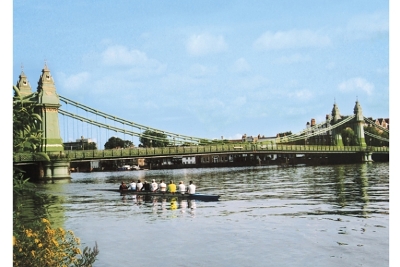